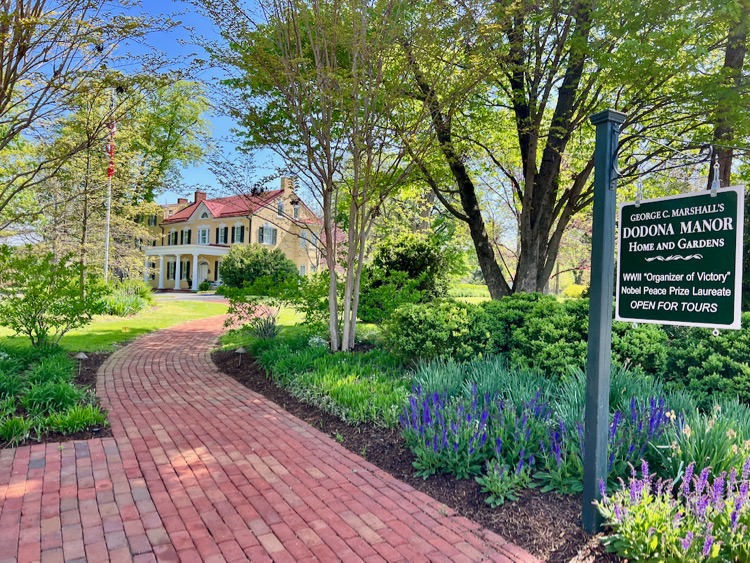 Unlike many historic homes, Dodona Manor fully captures the lifestyle of its famous occupants, George and Katherine Marshall. That's because over 90% of the furnishings and personal items in the renovated home belonged to the couple.

Docent-led tours give visitors an intimate look at how the Marshalls lived, relaxed, and entertained during their time in Leesburg. The Marshalls used their Leesburg house as an escape from the demands of government and Washington DC. The couple spent many happy times here, balancing George's critical role in world-changing events with a more normal daily life.

Beautiful gardens, lawns, and 29 varieties of trees surround the house. Even when home tours are closed, the grounds are open to visitors for picnics, relaxation, and play.

Both Franklin Roosevelt and Winston Churchill called General George C. Marshall “the greatest American of the 20th century.” During his 44-year military career, he served in both World Wars, rising from officer to Army Chief of Staff and director of the Allied victory in World War II.

But his greatest fame came after war's end when he created a blueprint for the reconstruction of post-war Europe known as the Marshall Plan. in 2022, Dodona Manor celebrates the 75th anniversary of the Marshall Plan, which the General introduced in a speech at Harvard University on June 5, 1947.

Marshall's post-war leadership continued when he served as Special Envoy to China, Secretary of State, President of the American Red Cross, and Secretary of Defense. In 1953, he was awarded the Nobel Peace Prize, one of the few military people to ever earn the award.

The Marshall's purchased their 3.88-acre Leesburg home on May 5, 1941. General Marshall was away at war, so Katherine selected the property on her own. She found the pretty home, surrounded by beautiful trees and lawns, and made a quick decision to purchase.

In fact, Katherine offered the $10 she had in her pocket as a deposit on the spot. She even threw the For Sale sign out front into the bushes to prevent any competing bids. During tours, visitors see that original sign on the stairs at Dodona.

When General Marshall died in October 1959, Katherine deeded the property to her daughter, Molly Marshall, who lived there until the 1990s. The house was in disrepair and developers were interested in buying the property.

Fortunately, concerned citizens jumped in, determined to save the historic home. Their fundraising efforts were successful, and the George C. Marshall Preservation Fund purchased the house and property in February 1995.

The home was carefully restored, retaining the building's original 19th-century details and the comfortable furnishings of the Marshall's life in the 1940s and 50s. In 1996, Dodona Manor was added to the Register of National Historic Places. Today, docents share stories from the Marshall's time at Dodona surrounded by the couple's furnishings and personal items.

Docent-led Interior Tours take visitors through all of the first and second-floor rooms in the Marshall's home. Docents are very knowledgable and the tours receive high ratings from visitors.

One of the highlights of Dodona Manor tours is that the home is still furnished as it was when the Marshalls lived there. Beautiful Chinese screens and art are present throughout the home, many of them acquired when George Marshall visited China with his first wife. Other items reflect the home's role as a relaxing refuge for the Marshalls.

Dodona Manor tours begin upstairs with a short video and an informative display that changes annually. During our visit, the display shared details of Katherine Marshall's life, but it will soon be updated to focus on the Marshall Plan.

Tours of Dodona Manor continue downstairs, where you get a close-up look at the common rooms. Compared to many historic homes, the scale is modest and the decor is relaxed.

The Marshalls sometimes entertained important guests, including President Truman, but their home was primarily a private retreat. They did not have the constant stream of famous visitors endured by George Washington at Mount Vernon.

Gardens and Grounds at Dodona Manor

The grounds surrounding Dodona Manor were one of the things that attracted Katherine to the property. The Garden Club of Virginia undertook the restoration of the grounds and gardens, and they are an important part of the Marshall House tours.

Both Katherine and George Marshall were avid gardeners. In fact, George astonished adults at the Peter Henderson seed company as a young man when he grew a massive tomato for a contest. He didn't win, but the judges were so impressed they called to confirm the entry was truly grown by a 12-year-old.

Today, the Marshall Garden grows 90% of the same plants that George once grew here. While smaller than the original, tomatoes, corn, greens, and more still fill the garden. Happily, that bounty is donated to Loudoun Hunger Relief to feed local families in need.

Dodona Manor hosts special events every year on the 4th of July and Veterans Day. The July 4th celebration follows the Leesburg parade and highlights Truman's visit to the home. Refreshments, including free ice cream, are served.

On June 5, 2022, there will be a special celebration to mark the 75th anniversary of the Marshall Plan. Find more events on the George C. Marshall website.

Here is essential information to help you plan your visit to George C. Marshall's Dodona Manor:

Whether you join a docent-led tour or not (and you should!), be sure to allow time to stroll the Dodona Manor grounds.

Leesburg is a fun and interesting place with a walkable historic downtown. The surrounding countryside is full of scenic roads, beautiful wineries, quaint towns, and pretty parks. Plan a getaway to Leesburg with our guide:

Where to Stay Near Dodona Manor

Lansdowne Resort is our pick for the best place to stay near Dodona Manor. Guests enjoy comfortable rooms and nice amenities including a spa and golf course.

There are many excellent restaurants in historic Leesburg and several of them are within walking distance of Dodona Manor. Here are four of our top picks for places to eat near Dodona:

Find more local restaurant information and options in our guide to 10 Tasty Leesburg Restaurants to Eat and Drink Local in Virginia.

Things to Do Near Dodona Manor

Here are a few interesting places to visit and fun things to do near Dodona Manor. Find more information and activities in our Leesburg Getaway guide:

Whether you visit Leesburg for a few hours or a longer stay, include a tour of Dodona Manor to learn about one of America's greatest leaders.