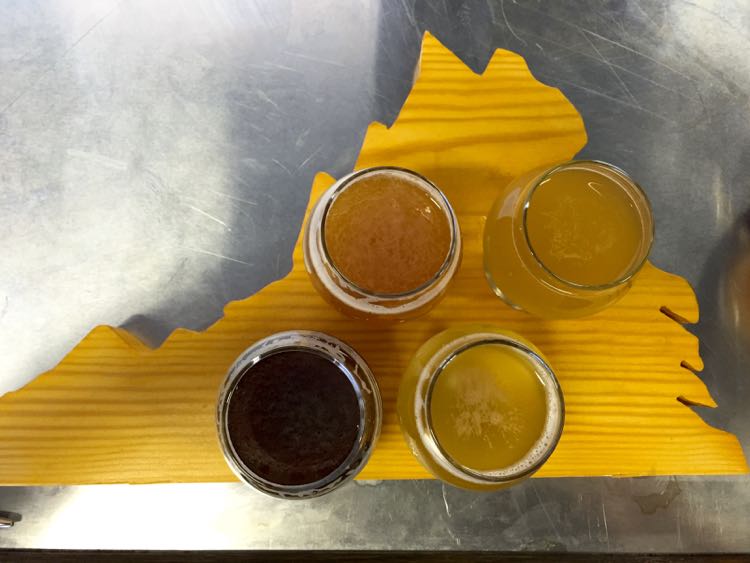 We first made this list of Northern Virginia craft beer and breweries in August 2015, when the Governor proclaimed Virginia Craft Beer Month and summer weather seemed like the perfect reason to sample delicious local brews. But let's face it, we crave beer all year long and it's always fun to try something new.

Ocelot openedin April, 2015, a welcome addition to the Ashburn brew scene. The owners repurposed a warehouse into an appealing mix of industrial and rustic elements that's a cool place to hang out and escape the summer heat. Their stated philosophy of not having flagship brands is unorthodox, but the changing menu of brews delivers interesting tastes and a reason to come back often. Open Thursday – Monday.

Caboose Brewing Company, next to the W&OD bike trail in Vienna, combines wonderful craft beer with delicious, locally sourced food in an inviting space. Brewed in steel tanks visible throughout the space, the brewmaster generally has 8 – 10 beers on offer in a wide variety of styles.

Caboose Brewing is fortunate to have tasty brews and food under one roof, and the location next to the bike trail in downtown Vienna draws a steady crowd on two wheels, by car, and on foot. They have been very busy on our visits, but we’ve always scored a nice spot at the bar, a table, or the patio.

A second location in the Mosaic District, Caboose Commons, has a large open patio and an indoor taproom.

Aslin Beer Company opened in September 2015 and quickly became a popular stop for Herndon and Reston locals. Since that humble beginning, Aslin grew beyond its original site and moved to a new taproom in Herndon. Today, beer-lovers can enjoy a large and tasty line-up of brews in a sleek taproom, spacious patio, and cool rooftop bar. In 2022, they opened Izzi, a pizza restaurant and coffee shop, next door.

In addition, Aslin has a taproom plus beer garden at a second location in Alexandria. Both of Aslin's Northern Virginia taprooms are open daily.

Next up is a taproom and brewing facility in Pittsburgh's popular Strip District.

One of the first craft breweries to open in the state of Virginia, Old 690 serves 10 or more nice brews by the pint, flight, or growler to go. We arrived near closing one Saturday, and only had time to try the Old 690 Amber Ale and the Oatmeal Stout. Both beers were very good, and the casual taproom and huge outdoor patio were welcoming and relaxing.

Old 690 is a fun dirt road destination, and we will definitely return to sample more of their offerings. Open Friday – Sunday.

Old Ox, another brewery with excellent bike trail access, just celebrated their first anniversary in Ashburn. Located between mile marker 25 and 25.5 on the W&OD, Old Ox offers a nice range of beers in a large, industrial interior. We tried a flight of 4 beers, and were particularly fond of the Golden Ox and the creamy Nitro Black Ox.

There's a small patio, a big bike rack, and a lot of space inside for relaxing or playing cornhole (they even field a competitive league). Open Tuesday to Sunday, closed Monday.

With 6 regulars plus seasonal additions on tap, you'll find some tasty beers and wacky names in the Belly Love taproom. Try a Weisse Weisse Baby or a malt-forward Shut the Fook Up, and relax in the eclectic indoor seating or small outdoor patio. Belly Love is very close to the W&OD in Purcellville, and they serve an evolving menu of tasty food, so it's a good destination on bike or by car.

The original Crooked Run microbrew was opened by a UVA graduate who raised initial funding through a Kickstarter campaign. The small location in the Market Station in Leesburg experiments with unique beer flavors. Their second larger location in Ashburn includes a Senor Ramon outlet so you can enjoy tacos with your beer.

Lost Rhino has been an Ashburn staple since it was opened in 2012 by two brewers who previously worked at Old Dominion. They have a large selection of delicious beers, including the popular Face Plant, and regular releases mean there's always something new to try. A locally sourced menu of appetizers and sandwiches is on offer at the Tasting Room. A second location in Brambleton Town Center, Lost Rhino Retreat, closed in 2020. Taproom open Tuesday through Sunday.

Opened in Loudoun County in 2015, Dirt Farm Brewing sits high on a hill next door to sister site Bluemont Vineyard. Dirt Farm offers a huge patio with that same great view and a comfortable indoor tasting room, plus a back area with a large fireplace.

Reston welcomed the April 2016 opening of Lake Anne Brew House with open arms. Taking over the space previously occupied by Singh Thai, they have a nice patio overlooking Lake Anne and an interior space with a lot of style. Grab a patio spot on a nice day and enjoy beautiful views while you sip.

There are so many breweries creating unique and delicious Northern Virginia craft beer, and new taprooms open frequently. We're very fortunate to live in an area so rich in fantastic artisanal beer, wine, and farm-to-table dining.