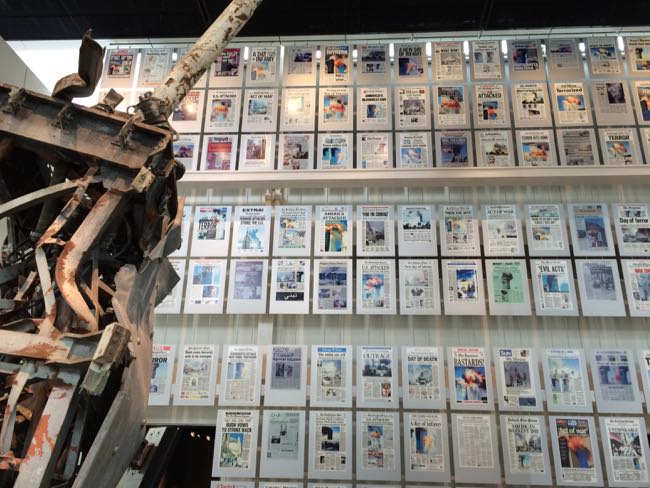 The Newseum takes a fascinating, in-depth look at news coverage across the globe, highlighting the importance of a free press, and exploring how the media both reports on and shapes important events.

UPDATE: Sadly, the Newseum announced that they are closing at the end of 2019 due to financial issues. We will miss this wonderful museum and it's mission to “champion the five freedoms of the First Amendment.”

In addition to the exhibits, the Greenspun Family Terrace offers wonderful views of DC from the Capitol down Pennsylvania Avenue, with displays describing the route taken by U.S. Presidents on Inauguration Day.

Some of the most interesting and emotional exhibits focus on particular events through the perspective of the journalists and the media coverage of the time. We found these four exhibits particularly moving.

Videos and displays tell the story of that horrible day through the journalists who were at or near the towers when the attacks occurred. A centerpiece of the display is the wreckage of the broadcast tower from the North Tower of the World Trade Center, and a wall of newspaper front pages from around the world.

A fascinating look at how news coverage changed over time, shifting from the early propaganda-fed view of a victorious U.S., to the stark realities of civilian massacres and a failing ground war. Be prepared if you have children along. We heard several children asking parents about the images on display, including the famous photo of a naked, crying Vietnamese girl running with other children as they tried to escape a napalm attack.

Two exhibits explore the civil rights movement through powerful images, video, and news accounts. “Civil Rights at 50” is a temporary exhibit (until Jan 3, 2016) focused on “Bloody Sunday” when state troopers attacked a peaceful protest march on the bridge in Selma, Alabama. “Make Some Noise” highlights the roll of students in pushing the Civil Rights movement forward. Photos of peaceful young protesters who were beaten, hosed, abused, and arrested are painful reminders of their bravery and determination.

A segment of the wall highlights the stark difference in experience between West and East Germans. On the West German side, colorful paintings and cartoons fill the wall, while the East German side is left a stark white, making it easier for guards to target people trying to escape. The gallery explores how news coverage and the media helped topple the wall and reunite Germany.

Media Coverage Through the Years

“Our liberty depends on freedom of the press, and that can not be limited without being lost.” – Thomas Jefferson

Many areas of the Newseum take a broader look at media coverage through history and include interactive displays to engage visitors in the stories and technology.

Every Pulitzer Prize-winning photo since 1942 is on display, with captions and videos telling the story behind the shot. We remembered so many of the images and stories in this incredible collection; making it even more engaging.

With a timeline of 400 historic news reports and wall displays highlighting media issues like censorship, accuracy, and sensationalism, this exhibit combines the old and new in an engaging way. You can also watch short videos in five small theaters that dive into particular issues facing journalists.

Engage and Interact with Media

You could spend a lot of time in the New Media Gallery, and it's the place to head if you or your children find your interest flagging. Touch walls give visitors interactive access to social media and news stories; you can even take a selfie and add your voice to the conversation. On a lighter note, a gesture-based game gives you a chance to drop a reporter in the dunk tank.

The Interactive Newsroom is popular with every age. Choose your background, grab the mike, and record your news report in front of the green screen. Afterward, you can watch your video back on TV with an appropriate lead-in from a real news anchor. Wear a green shirt if you want to be a see-through reporter.

Displays at the Ethics Center present choices faced by news reporters in relation to real news photographs. Make your choice, then see how your answer compares to journalists and non-journalists faced with the same ethical dilemma. On other floors, we were impressed with voting displays that allow visitors to join a quick visual poll related to current issues.

The Newseum takes at least half a day to explore, but we encourage you to allow a full day. Most visitors begin with the introductory video and Berlin Wall Gallery on the lowest floor, then take the elevator to the top and work their way down.

We visited during lunch time and were impressed with the quality of the Food Section (menu developed by Wolfgang Puck). Prices were reasonable too, and food is a good way to break up your visit.

You can also spend a few extra minutes during a bathroom break reading funny headlines on the wall tiles. The 4D movie is another good way to take a break from the often intense displays.

Tickets to the Newseum allow two days of entry, so it's a great place to visit if you're staying in DC overnight. Adult tickets are $22.95, but discounts are available (online, military, college, and AAA). Seniors 65 and older pay $18.95; youth 7 to 18, $13.95. Kids under 7 are free, but this really is not the best museum for young children.

You can easily spend many hours at the Newseum—a great option on a hot summer day in DC.