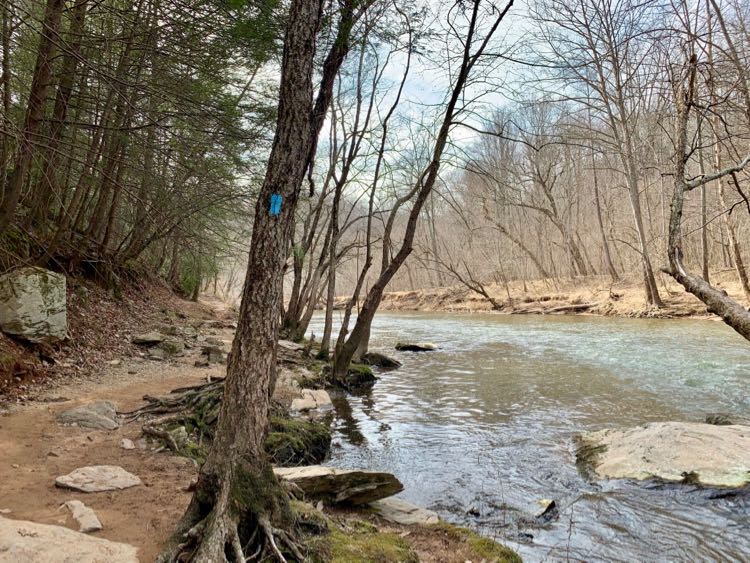 A northern Bull Run Occoquan Trail hike, from Centreville to Clifton, delivers a nice workout with scenic woodland and river views plus a bit of interesting history. The urban trail along the Fairfax and Prince William County border offers hikers easy access to a nice slice of nature in Northern Virginia.

The Bull Run Occoquan Trail, nicknamed the BROT, is one of several excellent long-distance trails in Virginia. The full trail stretches 18 miles, from Bull Run Regional Park in the north to Fountainhead Regional Park in the south. While it is close to urban neighborhoods and busy roads, the trail is a lovely slice of nature that feels more remote. In addition, there are historic sites along the trail that add extra interest.

We like to tackle long trails in sections so we wrote about section of the BROT in 3 articles:

No matter which part you hike, you'll find a mostly wooded trail with sections near the water. The biggest drawback to this trail is that you never fully escape urban noise. Fortunately, nearby neighborhoods are generally out of view and the woods are pretty peaceful considering how close you are to developed areas.

We divide the northern section of the BROT into two segments below. First is a 2-mile section from Bull Run Regional Park to a parking area on Route 28. Second is a longer and more challenging 5-mile hike from Route 28 parking lot to Yates Ford Road in Clifton. Hikers can tackle the whole stretch on a 14-mile out-and-back hike, or break them into two or three shorter hikes.

We assume you're headed south in our hiking description, but you can certainly begin the hike in Clifton and end at Bull Run Park. The entire trail is well marked—just follow the light blue blazes—and there are letter markers each mile.

This is a two-mile, easy dirt trail with nearly constant river views. The first mile of the hike is especially scenic as it passes through Bull Run Park. The second mile has more urban noise and views but still stays close to the water.

The northern trailhead for the BROT is between the Atlantis Waterpark parking lot and the Camp Store. Look for the small red bridge across the street and just down the road from the waterpark.

The first mile of the trail is especially scenic. Hikers enjoy a great view of the surrounding woods and wetlands from two long boardwalks.

Soon the trail reaches Cub Run, a wide and pretty stream. Follow the trail as it turns right and borders the stream. There are two benches where you can stop to enjoy the view.

In April, the area fills with beautiful Virginia bluebells and this section of trail gets much busier. Families and nature lovers of every age visit the park for a loop hike on the Bluebell Trail, one of the best spring wildflower hikes in Northern Virginia.

Eventually, the trail turns left again and crosses a bridge. Here you see the water in Cub Run rushing into the larger Bull Run river.

The trail stays close to Bull Run For the rest of this hike. The level dirt path is easy except for one tricky stream crossing over logs.

The second mile of this segment hike is noisier and not as scenic as the first. Two bridges add urban noise and litter on the riverbanks. Still, the trail is shady and there are steady views of Bull Run.

The trail climbs a steep hill just before you reach the end of segment 1, the Route 28 parking area. You could turn back at this point or continue onto segment 2.

This 5-mile section of the Northern Bull Run Occoquan Trail begins at a parking lot on Route 28 and ends at the Yates Ford Road connector trail in Clifton. The first 3 miles of this BROT segment are mostly wooded with short stretches near the river. Level sections are broken up with steep descents to several stream crossings on small bridges or concrete pillars. The last mile is closer to the water and more level.

Begin in the dirt parking lot on Route 28. A sign at one end of the lot describes Civil War action that took place at Blackburn's Ford below. At the time, fords and bridges were the only safe places to cross Bull Run and they were the site of many hard-fought battles.

Follows the stairs down to the river then turn left on the dirt Bull Run Occoquan Trail. (Alternatively, you could turn right for the two-mile hike to Bull Run Park.) The trail immediately passes under Route 28 and follows the edge of the river for a short distance.

Soon, the path veers away from Bull Run and into the woods. For the next 3 miles, the Northern Bull Run Occoquan Trail meanders through the woods, occasionally returning to the river. The trail generally follows a ridge, dipping to cross small streams then climbing back to the ridgeline. Some of the climbs are quite steep so you'll get a nice workout on this hike. Road noise fades as you move away from busy Route 28.

There is a horse bypass between mile markers N and M. The horse route cuts off a very steep climb but it includes a stream crossing where you will get wet. The last mile of this section is the easiest as the trail stays close to Bull Run. There are some rocky areas where you can cool your feet in the water, but be careful of the strong current.

The trail passes under an active railroad bridge and past the ruins of a concrete bridge. There is also a stream crossing on concrete pillars in this section. When you see the trail to Yates Farm Road you have reached the end of our segment hike. Need a rest? Follow the yellow-blazed trail up to Yates Road to enjoy a glass at Paradise Springs Winery before your return hike.

When to Hike the Northern Bull Run Occoquan Trail

The BROT is open year-round, but heavy rain and snowmelt lead to muddy sections and make fairweather stream crossings difficult. If possible, hike during a dry spell.

In April, the first two trail miles fill with blooming Virginia bluebells and other wildflowers. Spring is a beautiful time to hike the BROT as long as it isn't rainy. Summer can be steamy but most of the trail is shady and you can cool your feet in the water.

Find more information and any trail closures on the NOVA Parks website.

Fun Things to Do Near the Northern Bull Run Occoquan Trail

Extend your outing and create a fun day trip with these activities and destinations near the northern BROT: