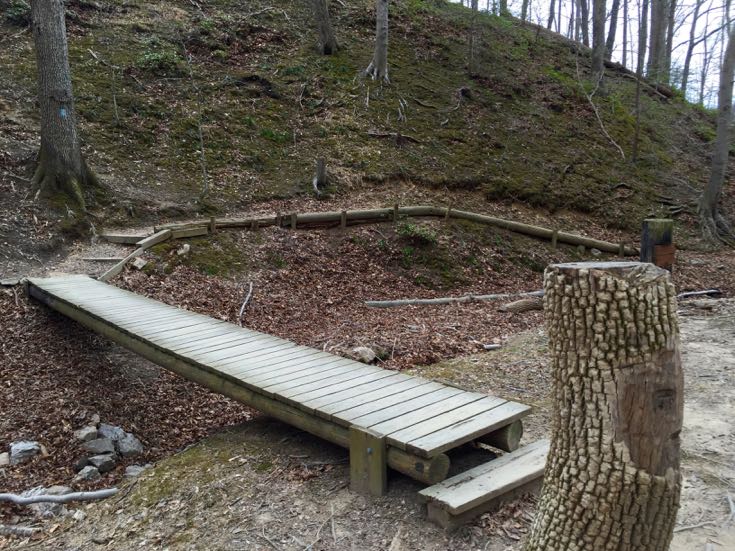 The Fountainhead to Bull Run Marina hike follows 6.5 miles of the Bull Run Occoquan Trail (BROT) along a stream valley and reservoir at the western edge of Fairfax County. This segment of the BROT is a wooded, dirt trail with some moderate hills and small stream crossings. There are several interesting historical markers on the trail, so this is a nice hike for history-lovers.

You can complete the whole Fountainhead to Marina section as a 13-mile out-and-back. Or follow our lead and break it into two 6-mile hikes, beginning at each end.

Fountainhead Park is one of the best places for mountain biking in Northern Virginia. Since bikes are allowed on this section of the BROT, stay alert and be ready to move off the path.

You can reach the trailhead for this hike on a Fairfax County scenic drive that includes several pretty Virginia Byways.

Our southeastern segment of the Bull Run Occoquan Trail weaves through the woods, climbs up and down ridges, and occasionally follows the edge of the Occoquan Reservoir. It's six-and-a-half miles (one way) from Fountainhead to Bull Run Marina. Fortunately, there are public parking areas that allow you to break the hike into two-mile segments if you choose.

Thanks to the maintenance efforts of PATC the trail is well marked and easy to follow. Frequent, steep hills will give you a workout and may not be a good fit for very young children. Expect muddy sections at stream crossings and waterside areas after heavy rains or snowmelt.

The trail begins at the main Fountainhead Regional Park parking lot on the right, near the mini-golf and restrooms. Near the start of the hike, stop at the Davis Lewis Cemetery on your left. Here you will see several grave markers from the 1800s and early 1900s, and some beautiful old cedars and boxwoods.

The trail is heavily wooded all the way to Bull Run Marina. You'll get a nice workout from the climbs and descents as you move along the ridges. The trees here are mostly oak mixed with stands of hemlock and pine. Mountain laurel, which blooms in early June, borders the trail in many areas.

Pretty pink, white, and grey granite rocks jut up from the forest floor. Just after the two-mile marker, the trail crosses Wolf Run Shoals Road and some very interesting history (details below).

The remaining four miles to the Bull Run Marina continue through the forest and near the reservoir. There are several stream crossings, with wooden bridges over the larger streams. Bridges sometimes wash out after heavy rains, so check the park website for alerts on closures and detours.

We enjoyed the Fountainhead to Bull Run Marina Hike in early spring after a dry spell. Less foliage allows for better views of the river from the ridges so this is also a fun winter hike when the ground isn't soggy. In May and June, hikers will see wildflowers and blooming mountain laurel along the trail. Summer can be humid and buggy, but at least the woods provide good shade throughout the hike.

If you begin your hike from Bull Run Marina, park at the large lot across from the marina parking. The trail is easy to access past the building at one end of the lot.

History on the Fountainhead to Bull Run Marina Hike

“Confederate veteran, Wellington Fairfax, and his family members are buried there… [including] four relatives who died in 1918, possibly as a result of the Spanish influenza outbreak. One of these, Robert Makely, was a member of the Independent Order of Foresters, a fraternal organization that traces its origins back to medieval times and the Royal Forests of the United Kingdom.”

There is a small parking area near the cemetery and additional space at the end of Wolf Shoals Road. You could turn back now and park here to start the next two-mile segment. We don't know about security in the area; you might be better off breaking the hike into three-mile stretches, parking at the busier lots on each end.

Of course, no hike in the Virginia countryside would be complete without a little Revolutionary and Civil War history. At the end of Wolf Shoals Road, just off the trail, you'll find both. An informational Civil War Trails sign describes the strategic crossing point nearby. Both Union and Confederate forces crossed the river here during the Civil War.

Nearby, a marker notes that the trail here follows a section of the 600-mile long Washington Rochambeau Wagon Route. Before the climactic Battle of Yorktown American and French forces traveled this route from Virginia to New England.

Find more information and any trail closures on the NOVA Parks website.