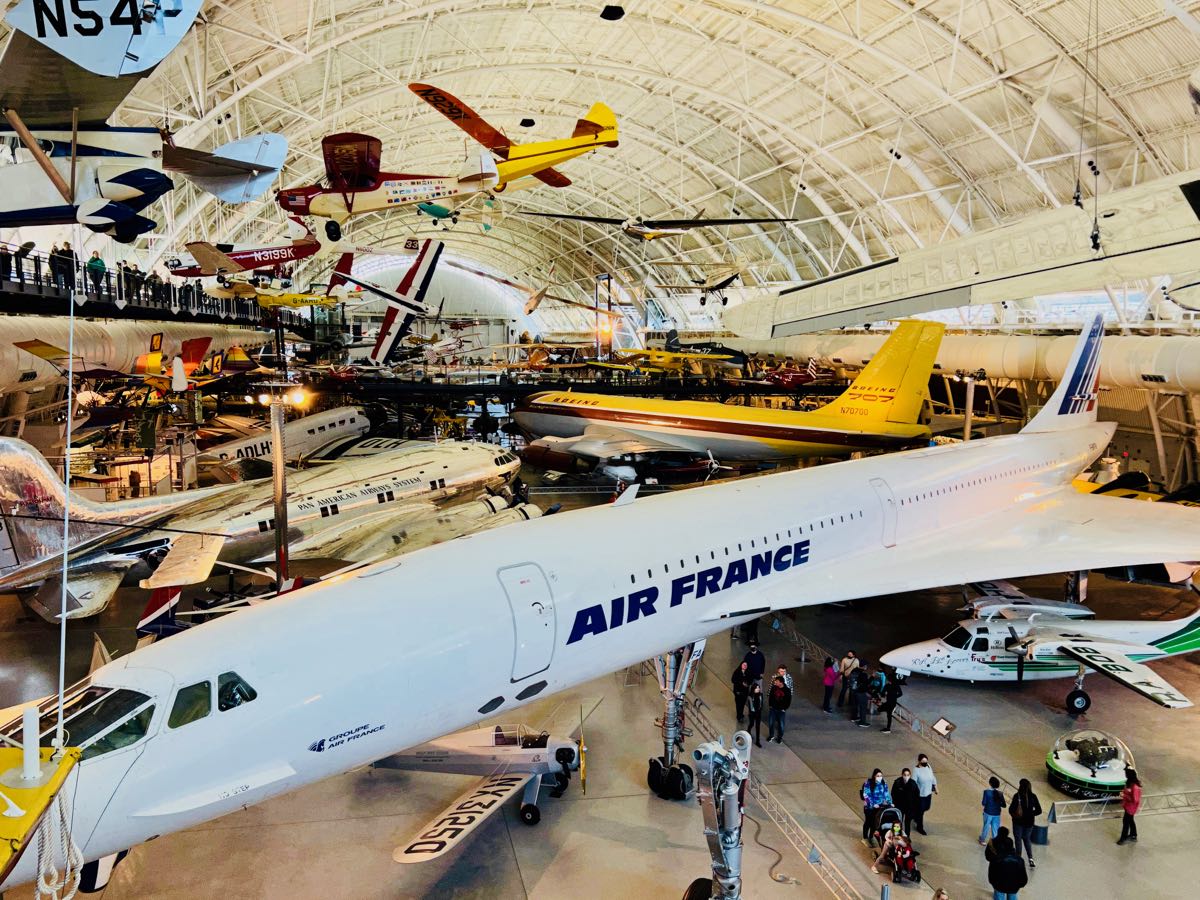 The amazing National Air and Space Museum Steven F. Udvar-Hazy Center in Virginia wows visitors with some of the Smithsonian's largest and most impressive aircraft. Housed in two giant hangars, the collection includes a Space Shuttle, Blackhawk SR-17, Concorde, and other huge aircraft. It's an impressive space that is a lot of fun to explore for all ages.

The most popular museum in Virginia, the Udvar-Hazy Center is an excellent year-round destination and is one of the top 10 attractions in Northern Virginia. When the weather turns too hot, rainy, or cold outside, this is one of our favorite indoor activities in Northern VA.

The Udvar-Hazy Center, one of the most visited museums in the US, is a fantastic place to bring out-of-town visitors. Fortunately, the museum is so huge that crowds won't be a problem no matter when you visit. In addition, admission is free (parking is $15) so it's a great budget day trip close to Washington DC.

Whether you spend a few hours or a full day, prepare for walking. The museum collection is spread out across three large hangars with concrete floors.

Here are the top 9 things to see at the Udvar-Hazy Center, according to the Smithsonian:

Of course, interests vary and the whole collection is worth checking out. Read on for things to do and see at the Air and Space Udvar-Hazy Center.

Like at most museums, the main activity for visitors is to walk around and explore the exhibits. At the Udvar-Hazy Center, exhibits are spread across three levels throughout two vast hangars. You can easily spend hours slowly working your way through the whole collection.

Several new aircraft are added to the displays and more undergo restoration every year. Visitors can now see the Mercury Freedom 7 capsule which carried Alan Shepard into space 50 years ago.

For the first time, visitors can take a close-up look at a U.S. Navy Blue Angels Hornet. Plus, sci-fi fans will be excited to see the addition of a full-sized X-wing Starfighter that appeared in Stars Wars: The Rise of Skywalker.

If time or attention spans are short, we suggest focusing on a few highlights. After you pass security, go straight to the rail for your first look at the huge Boeing Aviation Hangar. Ahead of you is the spooky-looking Blackbird SR-71, the world's fastest jet-propelled aircraft. and behind it, the Space Shuttle Discovery.

Our preferred route from the overlook is to head downstairs and straight ahead to the McDonnell Space Hangar. Here you can get a close-up look at the Space Shuttle Discovery which flew the most Earth-orbital miles during its 27 years in service. The Discovery carried 184 crew members into space including astronaut John Glenn who returned to space at age 77.

Other spacecraft and space artifacts around Discovery cover the Mercury, Gemini, and Apollo missions. For example, a Mobile Quarantine Facility was used by astronauts Buzz Aldrin, Neil Armstrong, and Michael Collins after their trip to the moon.

Standing next to the Space Shuttle is truly inspiring. Take time to walk around and take in the scale of the engines. Also, notice the complex tiled exterior and the visible scars from its many missions in space.

Around the shuttle, additional artifacts and displays share details about the human journey into space.

After the McDonnell Space Hangar, we like to explore general aviation displays on the first floor. Finally, we head up to the catwalk for an amazing view and additional exhibits.

The variety and scale of the aircraft—from the shiny Clipper Flying Cloud, to the streamlined Concorde, to the historic Enola Gay—always impresses. The Boeing Aviation Hangar is three football fields long so allow plenty of time to see the full collection.

If you have more time or members of your group have specific interests, there is plenty more to see throughout all three levels of the hangar.

Catch an IMAX Movie or a Simulation Ride

The Udvar-Hazy Center includes an Airbus IMAX Theater with a five-story high screen and several 3D movies to choose from. Buy advance tickets online to ensure access to your favorite movie, or just see what's available when you arrive. There are also simulator rides on the main floor of the Boeing Hangar.

Ar the Mary Baker Engen Restoration Hangar visitors can watch restorations in process from a mezzanine. Special tours of the restorations are offered every January. During our visit, we saw the Friendship 7 capsule and Flak-bait, which flew the most missions during World War II, being readied for restoration.

Near the IMAX theater entry, a short elevator ride takes visitors up to the Observation Tower. Level two explains the workings of the US Air Traffic Control system. On the top floor, enjoy excellent views of Dulles Airport and the surrounding countryside.

If your timing is good, you may see flights as they take off and land. Sometimes the flights pass directly above the tower, a dramatic sight.

Free docent-led tours are offered daily at 10:30 and 1:00. Often, aviation experts are on hand signing books and doing special presentations.

The museum hosts some fantastic special events throughout the year including a special Father's Day display. In addition, monthly Family Days focus on topics such as Women in Aviation. There's also a very popular Halloween trick-or-treating event every year on the Saturday before Halloween.

Tips for Your Visit to the Udvar-Hazy Center in Virginia

Admission to the Udvar-Hazy Center is free but parking is $15.00. If you arrive after 4:00 PM, parking is free, but the museum normally closes at 5:30 so your visit will be short.

There is a fun store where you can buy a real space blanket, space-inspired games, and gear. You can even buy an astronaut suit for the little ones.

Next door is a Shake Shack, the only restaurant at the museum, which serves a fast-casual menu of burgers, hot dogs, fries, shakes, and more. Outside food and drink are prohibited so Shake Shack is your only food and beverage option.

Remember, plan for a lot of walking! Wear comfortable shoes and bring a stroller for little ones. The huge hangars require a lot of walking on concrete floors. Strollers are allowed everywhere except the Observation Tower and the museum is wheelchair accessible.

The Smithsonian Air And Space Museum, Steven F. Udvar-Hazy Center is located at 14390 Air and Space Museum Parkway in Chantilly, Virginia. Visit the museum website for the latest updates on events and displays.

It is easier to reach the Udvar-Hazy Center in Virginia via public transportation now that the Silver Line Metro has been extended to Dulles Airport. From the airport, take the Fairfax Connecter No 983 bus one stop to the museum.

This gem in Smithsonian Institution's collection opened in 2003 at the south end of Dulles International Airport in Northern Virginia. The location met two key criteria for the project:

In 2012, Space Shuttle Discovery was flown in, strapped atop a Boeing 747. Locals were treated to several flyovers in Washington DC and Northern Virginia before the plane landed at Dulles. Direct airport access makes it possible for the museum to bring in and house new large aircraft like the shuttle. This would be impossible in the National Mall location.

Steven F. Udvar-Hazy donated $65 million for the museum's construction, making this one of the few Smithsonian buildings created with private funds.

Since its opening, the National Air and Space Udvar-Hazy Center in Virginia has grown to an average of one million visitors a year. With its impressive scale and extensive collection, the museum makes a fun and interesting destination for locals and visitors in the Northern Virginia and Washington DC region. And it's the perfect place to beat the heat or escape the cold.