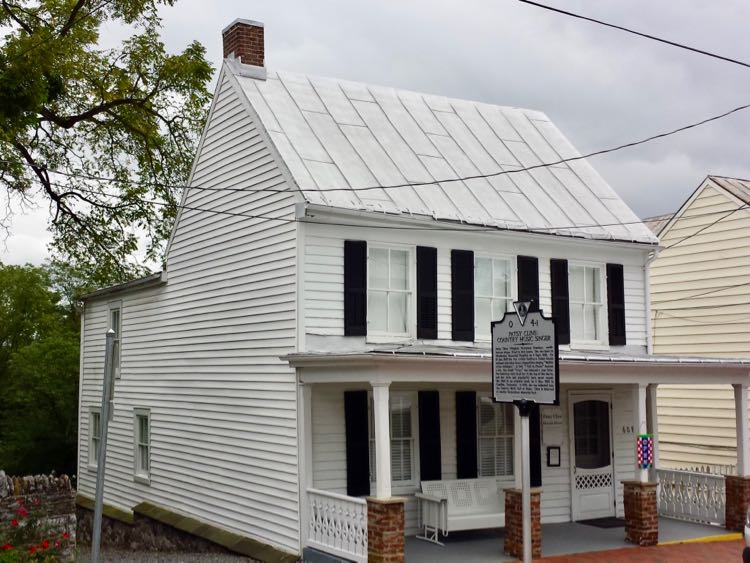 Visit the Patsy Cline House in Winchester Virginia to learn about the formative years of the “greatest woman in country music history.” Winchester is also home to an interesting Patsy Cline exhibit and the singer's gravesite.

The Patsy Cline House is scheduled to reopen to visitors in late June 2022, after a two-year closure.

Winchester makes a fun and interesting day trip from Washington DC and is a convenient stop for travelers on I-81. The walkable downtown is packed with great restaurants and breweries, plus local shops, historical sites, and family-friendly museums.

This article is a guest post by journalist Renée S. Gordon. Access to the Patsy Cline House was provided by the Winchester Frederick County Convention and Visitor Bureau.

It has been said that the loneliest time of the day is the hours between midnight and dawn. In 1957 Patsy Cline performed “Walkin After Midnight” on the Arthur Godfrey's Talent Scouts show, the American Idol of its day.

Cline wowed audiences with her performance of “Walkin' After Midnight,” winning the program's competition and $10,000. Although she was not the songwriter, she molded the tune into a heart-wrenching ballad that is palpable in its pathos.

Patsy Cline burst onto the national stage at that point and people have sought to honor her legend and learn her backstory ever since. Fortunately, it’s easy to follow her trail in the light of day in Winchester, Virginia.

Virginia “Ginny” Patterson Hensley was born in Winchester in 1932. Her father worked at Washington and Lee University and it was while living on campus that she was exposed to big band music. She said that her love of pop music began at that time. Her parents, Samuel and Hilda, later divorced; her mother, a seamstress, moved with her three children to Winchester.

Ginny was a self-taught pianist by the age of nine and soon added singing to her repertoire. At age 16, she dropped out of school and performed in local establishments. Her professional career began in 1952 when she performed with Bill Peer and his band.

Peer convinced her to change her stage name to Patsy, but her friends and family always referred to her as Ginny (as do many folks in Winchester to this day). In 1953 she wed Gerald Cline and it was as Patsy Cline that she made her first, unsuccessful, recordings the following year.

After her 1957 breakthrough performance on the Arthur Godfrey's Talent Scouts show she divorced Cline. Later that same year she married Charles Dick (in the house at 720 S. Kent St. in Winchester) and the couple relocated to Nashville.

Charles and Patsy had two children, Julie and Randy. In the 1960s Patsy became a cast member of the Grand Ole Opry in Nashville, Tennessee. She toured with Johnny Cash and repeatedly released songs that topped the country music charts.

On March 5, 1963, Patsy was tragically killed in a plane crash along with Hawkshaw Hawkins and Cowboy Copas. The plane had departed Kansas City and was headed back to Nashville. Her manager, Randy Hughes, a relatively new pilot, flew the Piper Comanche. He was flying by sight, not instrumentation, and became disoriented in a rainstorm.

The plane crashed two miles outside Camden, Tenn., 90 miles from its destination. There is a memorial at the crash site that you can visit to see an interpretive collage in a gazebo plus an etched boulder.

In Winchester, start your Patsy Cline tour at the Winchester-Frederick County Visitors Center where the popular “Becoming Patsy Cline” exhibit is on display for free.

Also be sure to look for the Patsy Cline Mural painted by high school students in 2004 at 210 S. Indian Alley. Driving around the city you’ll spot many things named in the singer's honor, including a road and a high school auditorium.

You can also visit the Patsy Cline gravesite and see a bell tower erected in her memory at Shenandoah Memorial Park. Visitors often leave a penny on the grave marker. The park is located at 1270 Front Royal Pike in Winchester.

By the time Patsy was 16 she had moved 19 times. The tin-roofed Patsy Cline Historic House was her 19th home and is the place where she lived the longest, from 1948 to 1953. Today, the house welcomes visitors and is listed on the National Register of Historic Places.

The Patsy Cline Historic House consists of a parlor, dining room, and kitchen on the first floor and one large L-shaped room on the second. A tiny toilet-only bathroom was added beneath the stairs off the parlor. It is hard to imagine Cline preparing for performances in the minuscule space.

The parlor is filled with photographs and memorabilia as well as a white piano, record player, and early television set. In the dining room, there's a salt and pepper shaker collection, Patsy's costumes, her mother’s sewing machine, and copies of her hand-drawn stage costume designs.

The outfits on display at the Patsy Cline House are Western-style ensembles, which she had initially favored. After she appeared on the talent show a female producer advised her to alter her style. In an aim to appear more sophisticated she shifted her style toward cocktail dresses and red lipstick.

The room on the second floor served as a bedroom for Patsy, her mother, sister, and brother. Curtains hung from a clothesline provided some privacy between beds.

Money was always an issue for the family so Patsy left school to work. Her many jobs included housecleaning and slaughtering chickens. She worked longest at Gaunt’s Drugstore as a popular waitress and soda jerk. Replicas of some items she used at Gaunt’s are on display in the Patsy Cline House.

Patsy was industrious; even while working she made time to perform. One of her favorite venues, and the site of her debut, was WINC Radio Station. At age 14 she walked into the station, said that she wanted to sing on the station’s 30-minute country music program, and the producers decided to give the girl a chance. They were wowed and she was invited back.

More than 25,000 people attended Patsy Cline’s funeral. Her gravesite is in Shenandoah Memorial Park near the North Gate. A 55-ft. bell tower in the southeast section of the cemetery serves as a memorial to the singer. Visitors often place a penny on her grave; it’s rumored to bring good luck.

Patsy forged her own path and went against convention by wearing pants, much to the consternation of the music community, and simply for being a divorcée. She was also known for being supportive of other female artists, offering help and advice.

In her brief lifetime, Patsy Cline recorded 102 songs and a trio of albums. Her legacy is widespread, enduring, and extends beyond music. She is credited with helping to create the Nashville Sound and in 1973 she posthumously became the first female solo artist inducted into the Country Music Hall of Fame. She was the recipient of a Grammy Lifetime Achievement Award, is depicted on a U.S. postage stamp, has a star on Hollywood Boulevard, and is in the Guinness Book of Records.

Here is essential information for your visit to the Patsy Cline House in Winchester VA:

Fans can explore more Country Music history on the Crooked Road in Southwest Virginia. Be sure to include a visit to the fascinating and interactive Birthplace of Country Music in Bristol.

This article is a guest post by Renée S. Gordon, an award-winning travel writer based in Philadelphia, PA. She has written a weekly travel column for the Philadelphia Sun for nearly two decades. Her honors include the 2013 African Diaspora World Tourism and Flame Keeper in Media Award for Travel Writing.