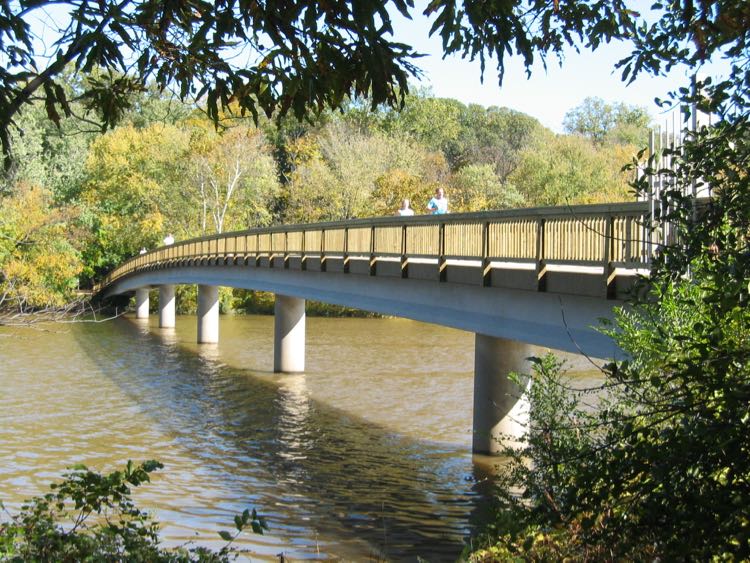 A Theodore Roosevelt Island hike offers an unexpected slice of nature at the edge of DC, with a network of dirt paths, a long boardwalk, an interesting tidal marsh, and some hidden surprises. The island is maintained by the National Park Service and includes a memorial to America's 26th president.

Winter and early Spring are fun times to visit the island because, with little foliage, you can spy the Kennedy Center, Watergate Hotel, and Washington Harbor Complex through the trees. In late Spring, wildflowers cover much of the ground, and in summer and fall, the trees provide nice color and shade.

History of the Island

In the 1790s, the island was the home of George Mason's son John, who built a brick mansion and cultivated gardens here. The Mason family sold the island in the 1830s and it was used by Union Troops during the Civil War. The Union army trained African American soldiers at Camp Greene, which was located on the island.

In 1932, the island was gifted to the US Government to honor conservationist President Theodore Roosevelt. The park we visit today was designed by Frederick Law Olmstead and created by the Civilian Conservation Corps as a natural sanctuary for public recreation.

Dirt trails and a pretty boardwalk circle the island and connect to the memorial plaza. When the Potomac is at flood stage after heavy rains, the island trails can become impassable. Otherwise, you will find easy hiking and scenic views on this narrow island that has mostly returned to its natural state.

Roosevelt Island is small, with 88 acres of forest and wetlands crisscrossed by 2 miles of trails. The accessible size is perfect for a short break from busy Northern Virginia and DC.

Once you walk onto the footbridge to Theodore Roosevelt Island, you are officially in the District, since Virginia's boundary ends at the river's edge. After you cross the bridge, you'll find a sign with a map of the park and some information about the nature you might encounter during your visit.

Now you have a choice to make. You can head uphill to the Theodore Roosevelt Memorial, or you can skirt the island first and finish your trip at the top. If you're making the first visit with children or out-of-towners, it can be fun to walk around the island first, then finish with a surprise at the top.

Since the island is small and all of the trails are relatively short, we suggest you circle the island on the Swamp Trail, then head up to the Memorial Plaza, and finally walk the Uplands and Woods Trails if time allows.

Go right at the sign, following the trail closest to the water or the Woods Trail. You'll have views back toward Virginia until you round the corner near the bathrooms and encounter a cool view of the Theodore Roosevelt Bridge to DC. The trail almost passes under the Roosevelt Bridge before it loops to the left and reaches the Swamp Trail. Here you will find a surprisingly long boardwalk over the tidal marsh.

There are several spots to stop and watch for birds and other tidal visitors along the way. Notice the cool-looking cypress knees near the second platform, and watch for heron, woodpeckers, ducks, and other native birds.

Teddy Roosevelt was fascinated by birds, and the boardwalk is a popular stretch for birders enjoying one of his favorite pastimes. Nearly 200 species of birds visit the island each year, and you can download a checklist from the park website to take on your visit.

We brought our twins here when they were about 5 and had a picnic on one of the benches. The kids loved walking back and forth on the boardwalk, but there are no guardrails so you'll have to hold on to young toddlers.

As you walk along the boardwalk, you may catch views between the trees of the Kennedy Center and the Watergate Hotel. Frequent planes pass overhead since flights north from National Airport must avoid prohibited airspace that protects the White House, National Mall, and Vice President’s Residence.

City Views from the Island

At the end of the walkway, make your way to the river for a clear view of the Washington Harbor Complex.

The complex is protected by 12 to 17-foot flood gates that were the first of their kind in the world when built. The gates can be raised to protect the property when heavy rains, snowmelt, and high tides bring the Potomac River to flood stage.

In 1996, the flood gates did their job when the Potomac crested 13.8 feet above normal. Unfortunately, they were not raised after torrential rains in 2011, leading to massive flooding and damage. The gates are raised in the next picture, taken when the Potomac was high due to Hurricane Joaquin.

You can also view Georgetown and the Key Bridge from the north end of the island.

Once you round the northern end of the island, there are clear views to Arlington as the path continues close to the water. If there have been recent rains, the path is likely to be muddy. If the mud is too heavy, double back and turn uphill to the Memorial.

Perhaps the big surprise of a Theodore Roosevelt Island hike is the massive memorial plaza at the top of the island. If you haven't told your kids or visitors what to expect, the first views of the statue of Theodore Roosevelt overlooking the large plaza are pretty dramatic.

Behind the statue are large, granite tablets with quotations from Roosevelt on favorite topics like Manhood, Youth and Nature. The quotes may sound a little odd to modern ears, but they express the love of the outdoors and conservation for which Roosevelt is known.

The plaza is another good spot for a picnic, and the urns, moat, and bridges create a nice spot to relax. Note that in winter there may not be any water at the plaza.

From the Memorial, you can return directly to the footbridge, or hike the Woods or Upland Trail before heading for home.

A Theodore Roosevelt Island hike explores one of those wonderful, unexpected, urban parks—so close to DC but with a unique, natural ecosystem to enjoy. If you live in Northern Virginia and you've never visited, you really should. No need to wait until your next out-of-towner arrives.

Directions and Tips for a Theodore Roosevelt Island

There is a free parking lot near the footbridge to Roosevelt Island. You can only access the lot heading north on the George Washington Memorial Parkway, just north of the Theodore Roosevelt Bridge. If you're approaching from the north or west you'll need to go further south on the Parkway and reverse direction at the Arlington Cemetery rotary.

There are a good number of parking spaces in the lot, but they do fill up on the weekend and after work on warm days. This is also the northern access point of the paved Mount Vernon Trail, so the lot is popular with bikers and joggers.

While it is easy to visit by bike, bicycles are not allowed on Roosevelt Island. There are bike racks and a BikeShare rack near the parking area.

The Windy Run hike, on the Potomac Heritage Trail, also starts from this lot. In fact, you can hike along the Potomac River from Roosevelt Island all the way to the Key Bridge.

Roosevelt Island is open daily, from 10:00 to 6:00, and there is no admission fee. In the winter, restrooms are closed and the park provides a portable toilet. Visit the National Park's Theodore Roosevelt Island website for more information and to check for special events and trail closures.