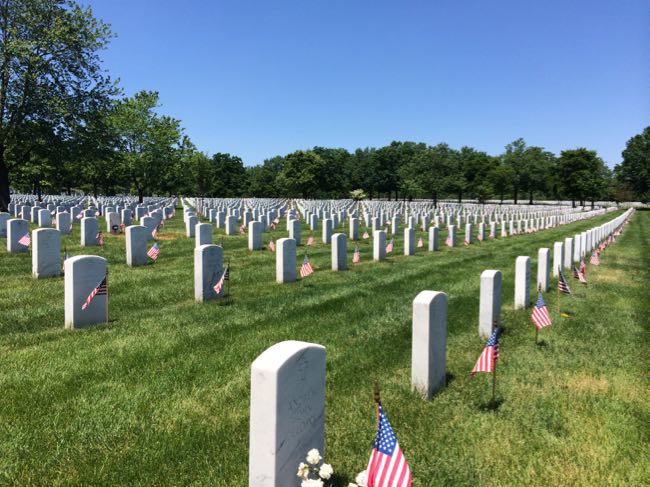 Arlington National Cemetery is a special place, solemn and heart-breaking, but beautiful and inspiring too. Many tours and school groups arrive by bus, transfer to another bus, and make a quick visit to the Tomb of the Unknown and a few famous gravesites, then experience the rest from the road.

It's a great system for the mobility-impaired and people short on time, but to really appreciate the magnitude of our nation's heroes and loss, we recommend a long walk on the streets throughout the cemetery and a slower visit to some of the historic spots.

Remember that you are on hallowed ground. 320,000 men and women are buried at Arlington, all of whom served their country honorably. Visitors are expected to show respect and decorum at all times.

Honor the Tradition, Remember the Sacrifice, Explore the History

Begin your visit at the Welcome Center to learn about Arlington National Cemetery and to pick up a map. A life-size replica of a bugler playing taps is on display.

Here are 5 ways to explore Arlington National Cemetery and gain a deeper understanding of the people and places memorialized at this important Northern Virginia site. You'll need plenty of time and good walking shoes to complete everything on this list.

1. Watch the Changing of the Guard at the Tomb of the Unknown

Here rests in honored glory an American soldier known but to God.

Remains of an Unknown Soldier from World War II, the Korean War, and Vietnam were later interred in the tomb. The Vietnam soldier was later exhumed and identified, and it was decided that the Vietnam Unknown will remain vacant.

The Tomb of the Unknown is guarded every second of every day of the year, a silent vigil to the sacrifice of all who serve. The Changing of the Guard occurs every hour on the hour year-round. An additional change occurs every half hour during the summer.

The Tomb is guarded by the 3rd U.S. Infantry Regiment, known as “The Old Guard,” the oldest active-duty infantry unit in the Army. Sentinels go through a rigorous selection and training process and their movements are precisely scripted.

TIP: The best place to view the Changing of the Guard is on the southern end of the steps or plaza. You'll have a better view of the white-glove inspection of the relieving guard from that side. Visitors are asked to stand in silence throughout the change, and we were very impressed with the behavior of school groups and young children throughout the ceremony.

Take a walk through the house and garden, then head to the museum to learn about the Lee family, and Robert E. Lee's decision to resign from the US Army. Lee wrote his resignation letter the night of April 20, 1861, in his bedchamber on the second floor of Arlington House.

In 1864, the property was appropriated for use as a military cemetery, ensuring that the house would be unusable to Lee should he ever decide to return (he never did). A vault was constructed in the rose garden which holds the remains of 1,800 casualties of the Battle of Bull Run. Many other Civil War dead are buried around the house.

Visit the buildings behind Arlington House to learn about the enslaved people who built the mansion, and who lived and worked for the Lee family.

You'll find beautiful trees and gardens throughout Arlington Cemetery's 624 acres, including two State Champion Yellowwood and Empress trees (located in sections 23 and 46). Take a slow walk along Farragut and Memorial Drives to view the Medal of Honor trees, 36 historic trees that commemorate Medal of Honor recipients.

In Spring you'll find blooming cherry trees, redbuds, and other colorful beauties. In summer the trees provide a shady break from the heat, but picnicking is not allowed in the cemetery, so keep your stops appropriate.

4. Locate and Visit a Grave with the ANC mobile app.

The cemetery is very large, with seemingly unending rows of grave markers. It can be very difficult to navigate except to the major sites, which are marked with street signs. Fortunately, there is an excellent app that you can use to navigate, get background information, and even locate a particular grave.

A tour is another excellent way to explore Arlington Cemetery. Tram Tours take visitors to four major sites including the John F. Kennedy gravesite, Tomb of the Unknown Soldier, and Arlington House. Purchase tickets for the narrated, hop-on hop-off tour in advance or on-site.

Whether you stay all day, or only for a brief stop, Arlington National Cemetery is a profound experience. We highly recommend you take extra time to immerse yourself in this “wonderful, terrible” place.