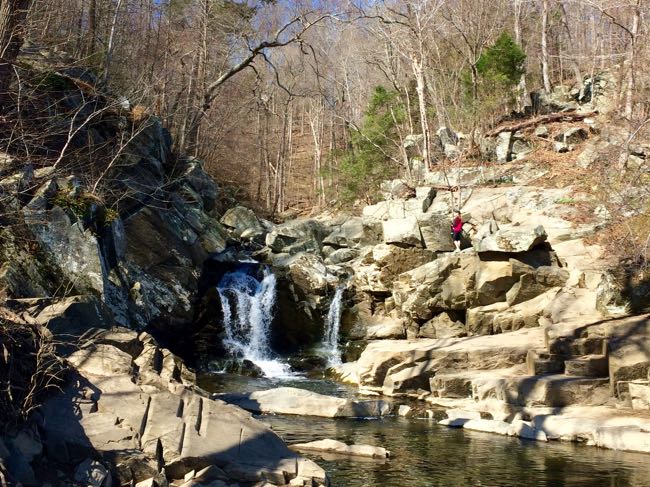 This Scotts Run loop hike includes a cliffside view, a scenic waterfall, and a nice, somewhat challenging stretch of the Potomac Heritage Trail, close to Washington DC. It’s an interesting hike year-round but is likely to be muddy and slippery after heavy rains and melting snow. Scotts Run is one of our favorite fall hikes in Virginia, with beautiful foliage views in the woods and by the river. 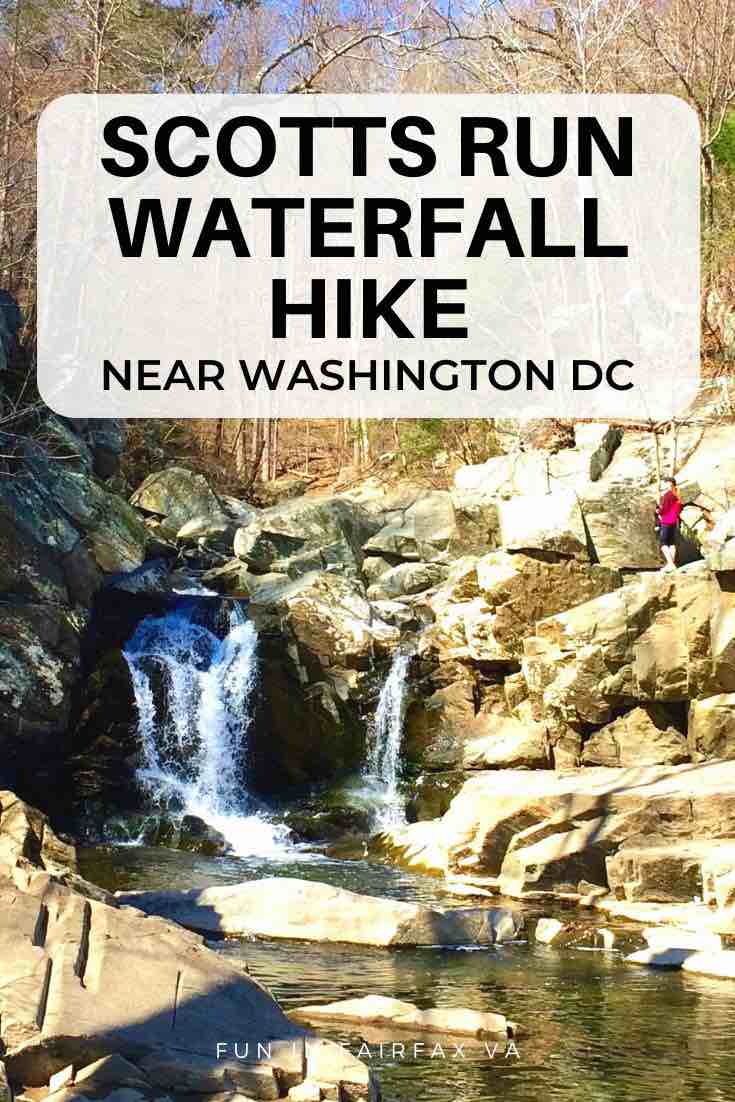 Scotts Run Nature Preserve is a popular stop for joggers, hikers, dog walkers, and families looking for a pretty waterfall not far from DC. The park is accessible from two parking lots along Georgetown Pike, just west of the 495 beltway, on the Virginia side of the American Legion Bridge. 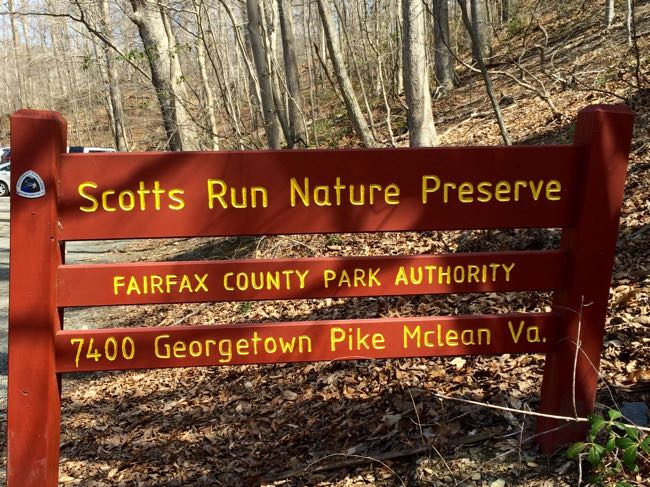 Most people park in the larger of the two lots and take the direct route down to the waterfall on the River Trail, then return on the same trail. This is a perfectly nice short hike (about 2 miles out and back), but it misses the quieter, scenic trail and views along the Potomac River.

If you have the time, we highly recommend a roughly 3-mile loop that starts at the eastern parking lot (SN3 on the map below), follows a segment of the Potomac Heritage Trail (the PHT is the light blue trail), then returns to the starting point via the Parking Lot Connector Trail (the purple trail). The trails are fairly well marked, but print a copy of this Fairfax County Park Authority map to track the connecting points.

For this loop, we prefer to start from the smaller, eastern parking lot, but you can start from the larger lot if you prefer. From the eastern lot, head north on the wide, yellow-blazed Stubblefield Falls Overlook Trail. Turn right on the blue trail when they intersect and follow it until you are almost out of the park. Turn left on a short connector to join the Potomac Heritage Trail.

Since the park is near busy 495, you’ll likely hear steady road noise as you walk, reminding you that the city is not far away. The wooded trails are nice though, and the noise of the river eventually replaces the road noise.

The PHT turns left, climbing a bluff above the river, but you can head down to the water for a look at the American Legion Bridge before continuing up the trail.

From here to the overlook you’ll follow an often steep, rocky, and narrow trail that can be tricky to navigate, especially when the rocks are slippery. We wouldn’t recommend this segment for young children or people with a fear of heights, but the challenging terrain is what makes this a fun and less used trail

From the overlook, you’ll have an excellent view up and down the Potomac, though portions are blocked with foliage except in winter. This is a nice spot for a lunch or snack stop before continuing on the PHT.

Another half mile on the PHT and you’ll reach the popular Scotts Run waterfall. This is another great spot to have lunch or just spend time relaxing by the falls.

What you should not do, though, is enter the water. Though people love to cool off in the stream and the river on a hot summer day, the water is unfortunately polluted and not safe for human contact.

Surprisingly, Scotts Run originates under Tysons Corner Center mall. From there, the stream passes through busy populated areas, collecting waste and polluted runoff as it goes. Swimming is never allowed in the Potomac due to its dangerous currents. And pollution makes wading or bathing in Scotts Run equally hazardous. You can still have fun climbing around on the rocks that surround the falls.

When you’re done admiring the waterfall, head up the steep hill, continuing on the PHT away from the river.

There are three stream crossings on this stretch of trail, one over a bridge, and two that use cement pillars as stepping stones. The pillars are occasionally covered by water after heavy rains.

When you reach the larger parking lot, find and climb the steps up to the Parking Lot Connector (purple) trail for the return hike to your car.

Throughout the park, keep watch for native birds like the giant pileated woodpecker. In spring, the woods come alive with Virginia wildflowers.

Scotts Run almost became a cluster of 309 homes after a developer purchased the land in 1966. Fortunately, the community and government officials successfully lobbied to preserve the area and the U.S. Department of the Interior eventually purchased the land.

Explore more of the Potomac Heritage National Scenic Trail in Northern Virginia on these nice hikes close to DC: 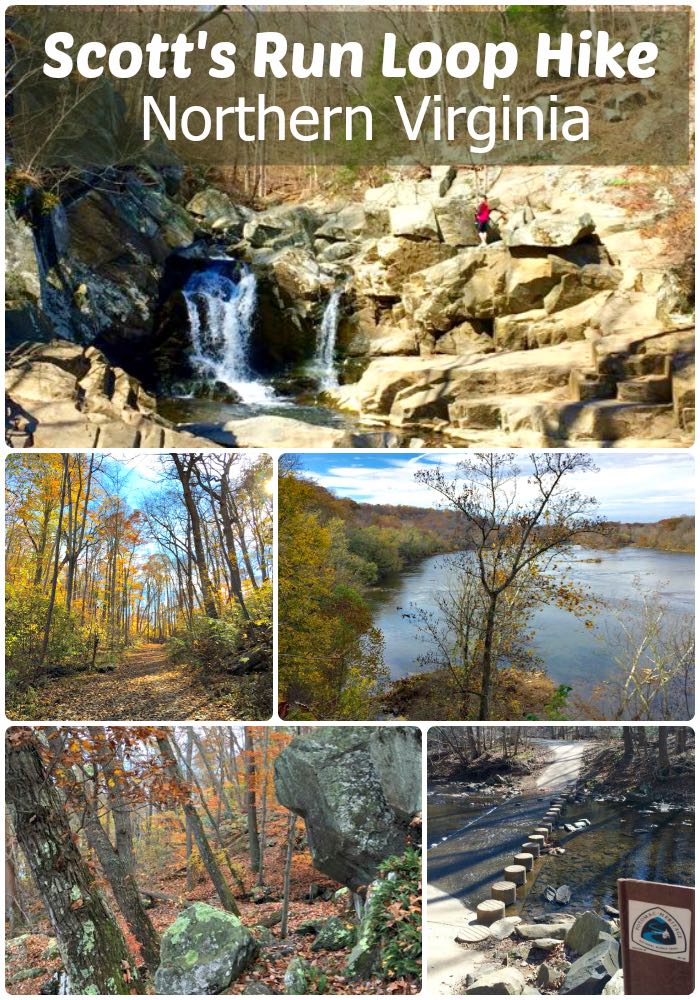